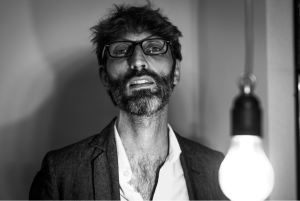 Stefano Lentini has gone where intrepid explorers have in the past dared to tread but have rarely done so with such confidence.

Fury. is the new album of composer Lentini, who has already achieved significant success within the film music world, not least due to his involvement in the Oscar-nominated “Grandmaster” in 2013. Fury is an album which combined the dynamics of classical music with the bravado and showmanship of progressive rock, the resultant tracks being expressive and effective without blundering through cliches and tropes, as many marriages with classical music tend towards.

Fury will be released November/December 2018. It is the latest album of the Italian composer, well known for his collaborations in music for film for directors such as Wong Kar Wai (The Grandmaster), Giacomo Campiotti (Braccialetti Rossi) and Carmine Elia (La Porta Rossa).

Fury, produced in collaboration with award winning sound engineer Geoff Foster, (3 Grammy Awards for Both Sides Now by Joni Mitchell, Ray and The Dark Knight soundtracks), explores the territory of anger and redemption and is a journey in which the emotional crushes with the rational smashing the syrup of do-goodism. Freedom built out of geometric elements, Fury explained by Stefano is:

“a journey into anger which leads to its understanding, contact, its encapsulation into something else”.

To confirm this concept, there’s the only track with lyrics, Les Fleurs Du Mal, which explores the depth of a censored pain. The song, written in French, owns with profane elegance the album’s primitive essence.

Suite After the Furies, the album’s flagship piece and first single, takes shape from artist Kevin McGloughlin’s visual work, by 3D light ghosts. The single encapsulates the special effects illusions of a new world which threatens to destroy but ultimately softly expands, culminating in a piano epilogue which develops in a climax of tense flash glows.

The second single, Fury, is characterized by its turbulent orchestra, devilish drums and screaming sax. Its video-clip made by French artists Samuel Yal delves into a disturbing dimension whose pastel and saturated shades seem to draft a plastic poem. The visual piece carries the rhythm of a hopeless nature’s dance which accompanies a man who, struck by his own mortality, tries to trap within himself a symbol of the infinite: a screaming bird with twisted features.

Stefano Lentni is a music composer based in Rome, Italy. He has produced music extensively for film, television and documentary, increasingly gaining prominence for his soulful and unconventional touch. He is part of the new generation of Italian composers whose cutting edge soundtracks make them worthy heirs to Rota and Morricone.

Stefano dedicated himself to the composition and arrangement of music from an early age. His first instrument was a classic guitar made by his grandfather, a carpenter, out of some old wardrobe doors. He graduated with high honours in Cultural Anthropology and studied Ethnomusicology in Rome and in London. He made his artistic debut at the Folkstudio, a historic nightclub in Rome. As a multi instrumentalist, Lentini is known for blending classical music with folk and electronic influences through the use of multi track recording.

His main combinations include acoustic guitars in a John Renbourn fingerpicking style with electric bass, piano and string orchestrations. He additionally mixes sampler and synth with electric guitars. He is therefore considered part of the cross-chamber music wave.

The album Stabat Mater (Milan Records, distributed by Warner Classics/Universal) was an iTunes Top 10 Original Score Album in Belgium, Italy, France, Hong Kong, Singapore and Taiwan. It was No.1 in Hong Kong.